Looking for some fun for kids? Enjoy these printable outdoor sculpture activity pages from the Association for Public Art (aPA). This introduction to Philadelphia’s “Museum Without Walls” features mazes, connect the dots, drawing prompts, and more! Children are invited to think about public art in new ways and make their own creations at home. (Illustrations by Megan Bux)

The Art of Words 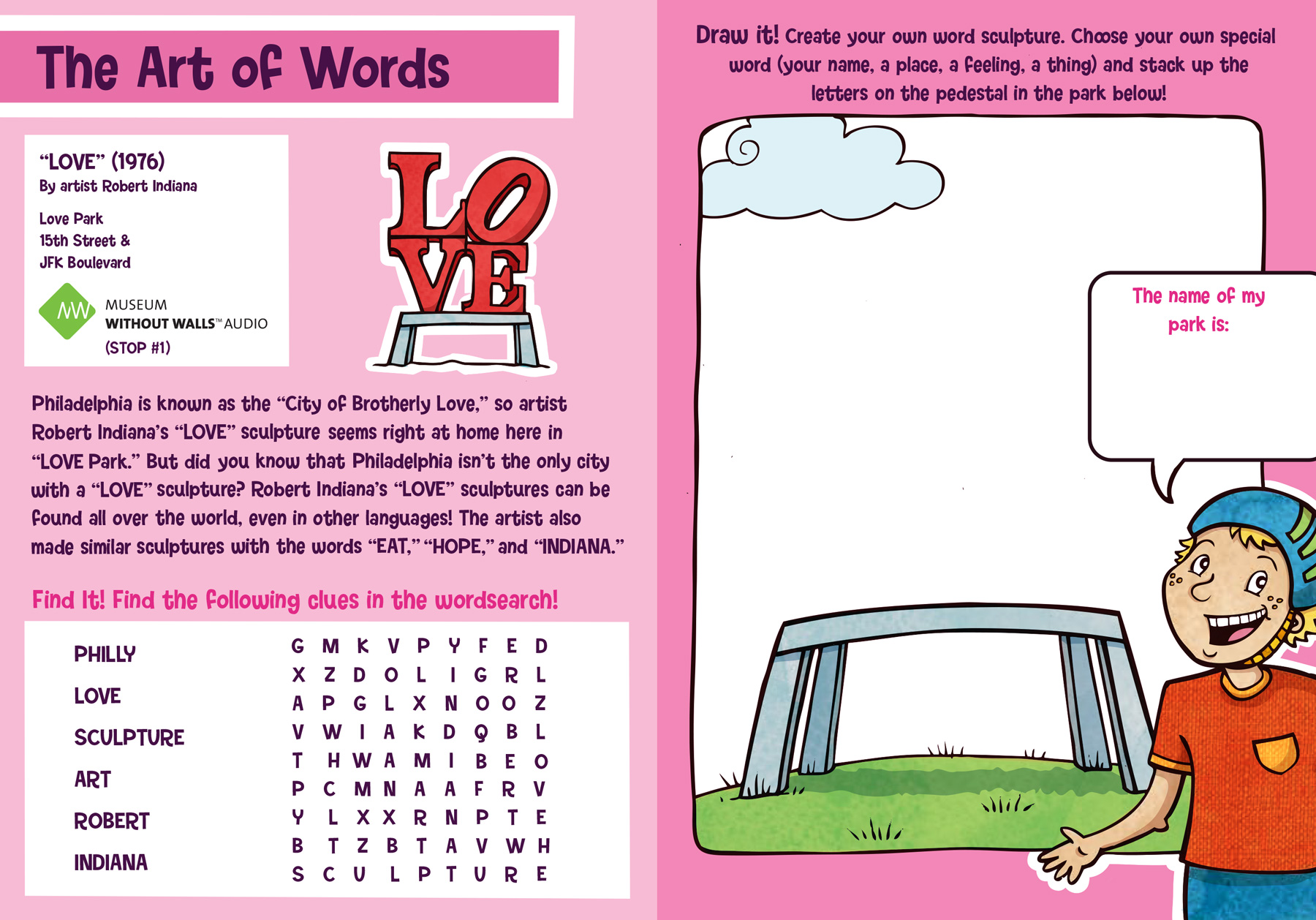 Hear artist Robert Indiana talk about his LOVE and AMOR sculptures, which are installed near each other on the Benjamin Franklin Parkway. 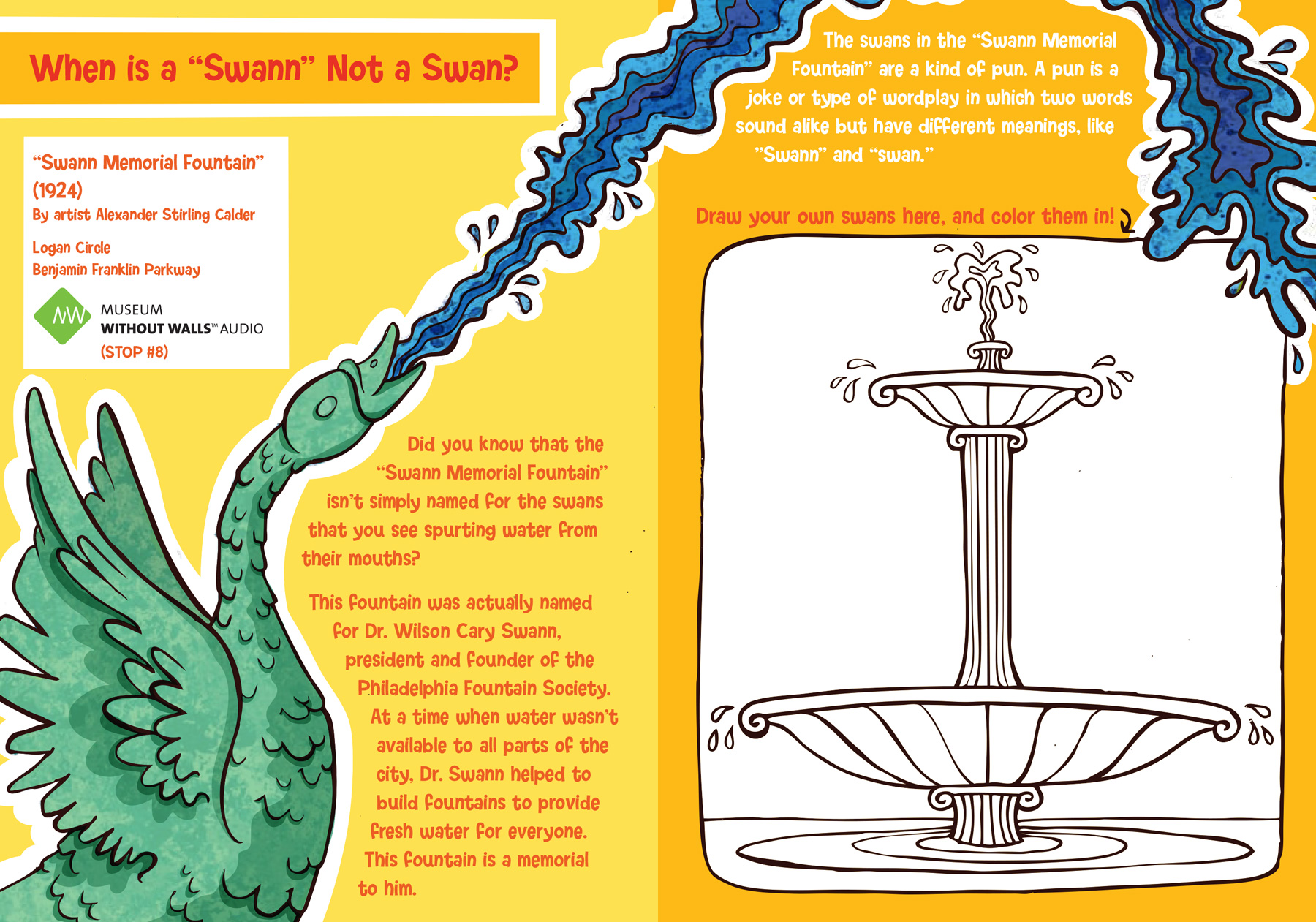 Did you know? There are three generations of Calders in Philadelphia – grandfather, father and son were all famous artists – and they each have artworks on the Benjamin Franklin Parkway. Learn more ››

Start With the Bone 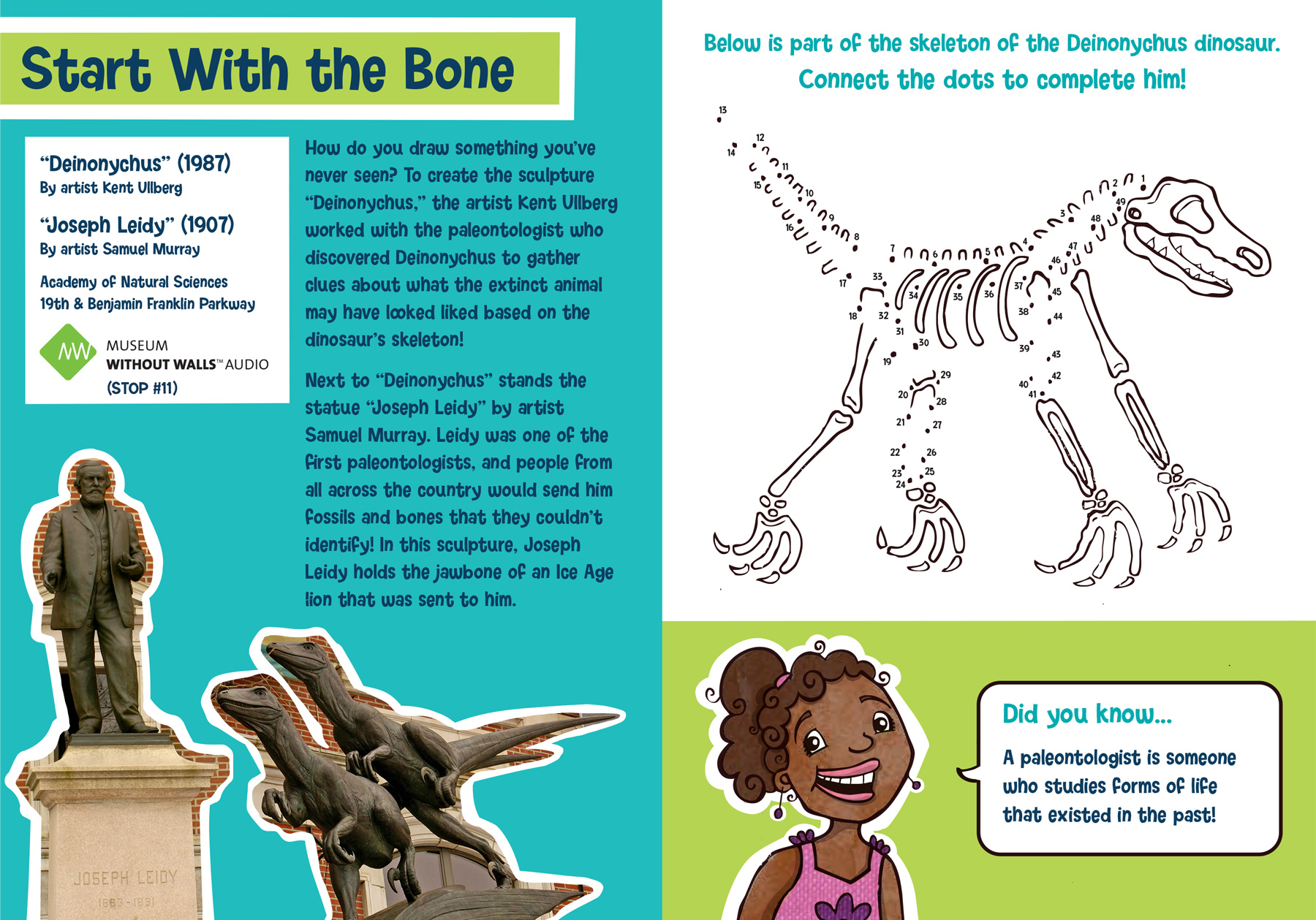 Hear artist Kent Ullberg talk about his Deinonychus sculpture and the statue of paleontologist Joseph Leidy nearby. These artworks greet visitors at the Academy of Natural Sciences on the Benjamin Franklin Parkway. VIDEO ›› 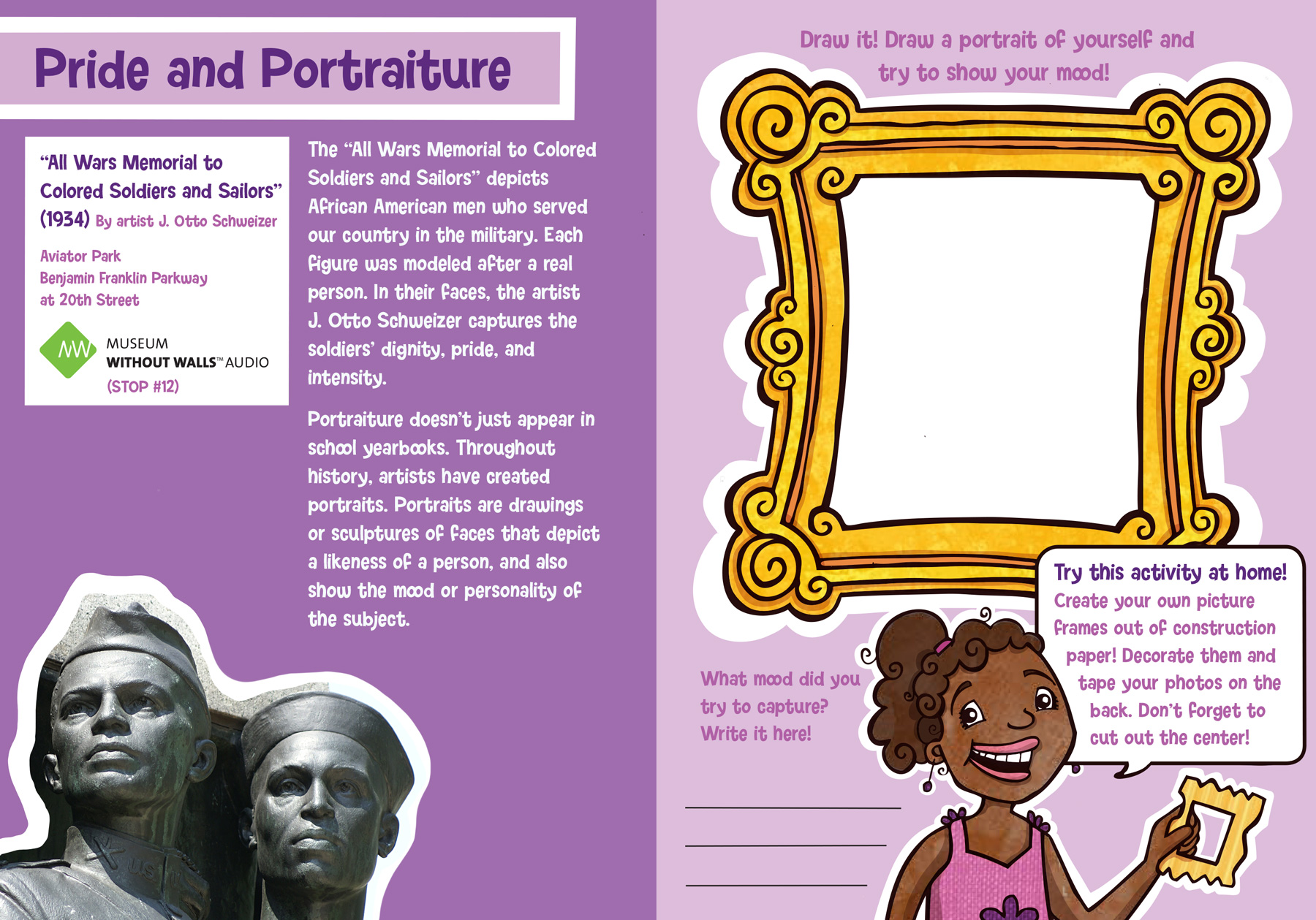 The All Wars Memorial was installed in a remote area of Fairmount Park, but it was moved to a much more visible site on the Benjamin Franklin Parkway decades later. VIDEO ›› 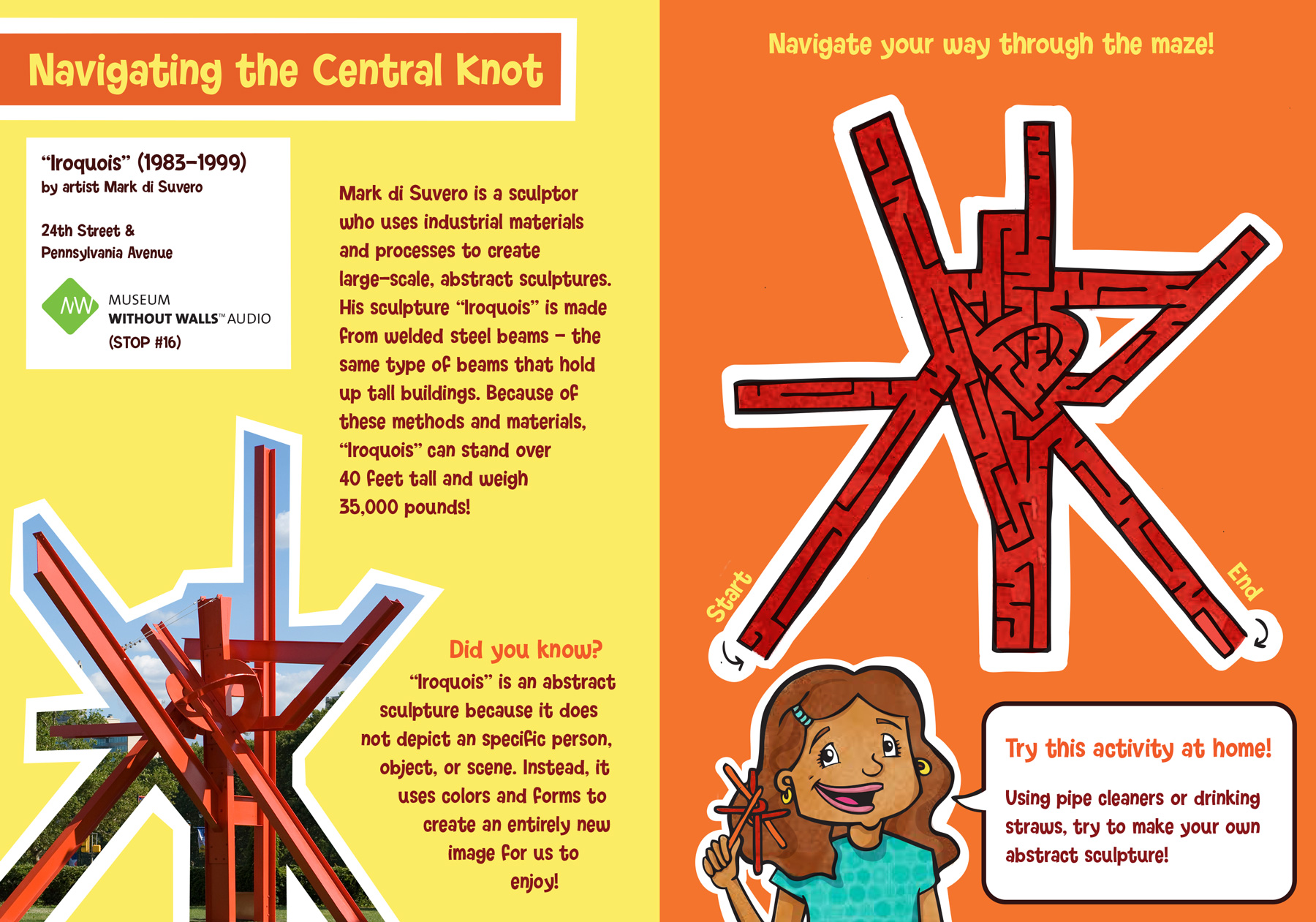 Did you know? Artist Mark di Suvero plays the vibraphone. Hear him play the instrument and talk about his Iroquois sculpture. VIDEO ››

What is The Thinker Thinking? 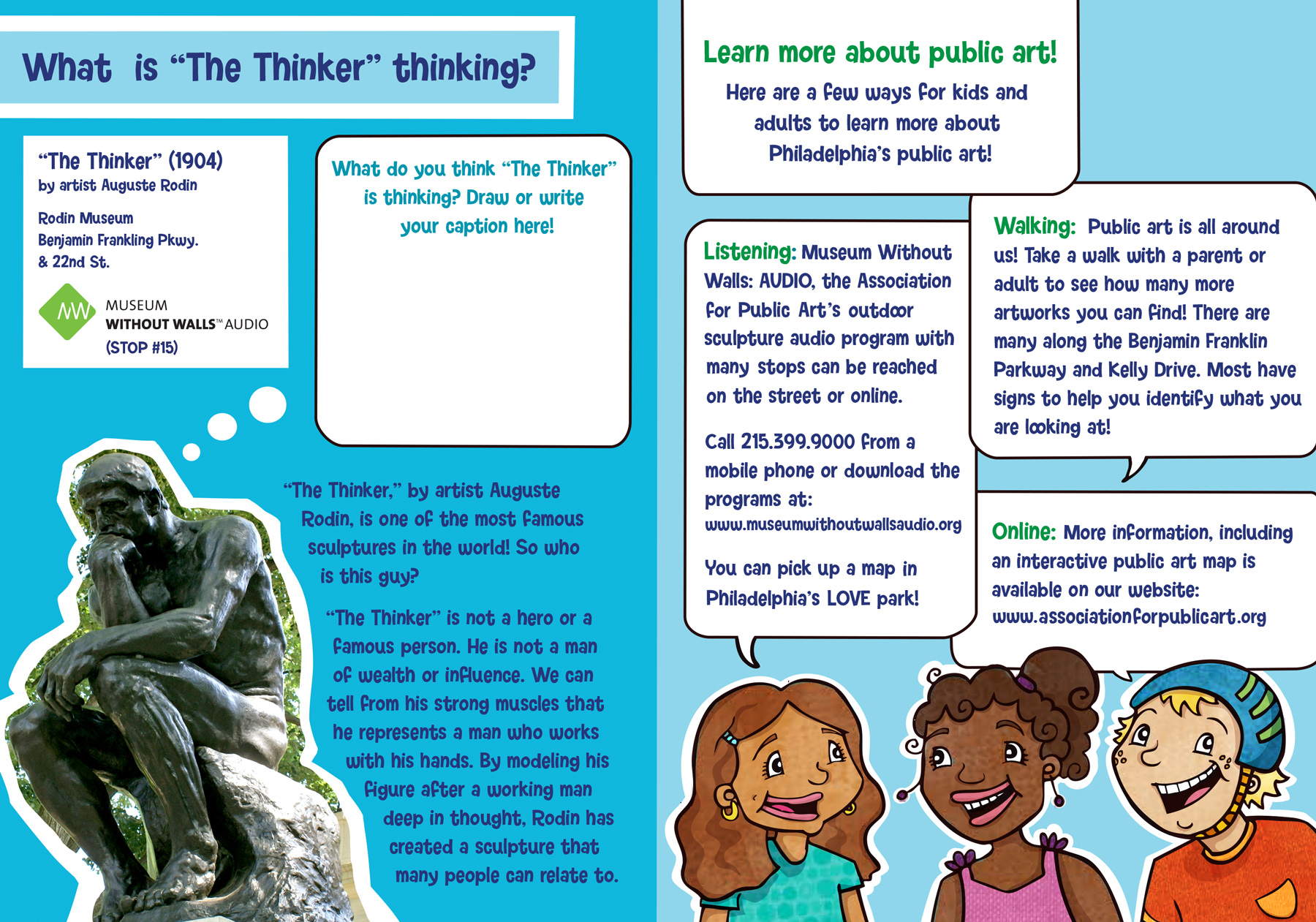 Did you know? Artist Auguste Rodin originally created The Thinker for another one of his famous works, The Gates of Hell. You can find both sculptures in front of the Rodin Museum on the Benjamin Franklin Parkway. Learn more ››

These activity pages are a project of the Association for Public Art (aPA) in cooperation with the Office of Arts, Culture and the Creative Economy (OACCE). Original support provided by PNC Arts Alive.

Kids can listen to our Museum Without Walls™: AUDIO programs to learn more about these artworks! To access the audios, find the sculptures in our online gallery or call 215-399-9000 and enter the stop number on this map.

We have always been dedicated to bringing you free and high-quality cultural content.
Your support ensures that aPA continues to provide Art for Everyone, Anytime.

For the bicentennial celebration in 1976, artist Robert Indiana lent the city a large aluminum sculpture of his “love” image. Indiana first produced this design as a painting in 1964.

The Academy of Natural Sciences, 19th Street and the Benjamin Franklin Parkway

This sculpture is the first full-size reconstruction of the 100-million-year-old dinosaur, Deinonychus

A leading figure at the Academy of Natural Sciences, Joseph Leidy (1823-1891) is known as the “father of American vertebrate paleontology,” and is recognized as the foremost American anatomist of his time.

The Honorable Samuel Beecher Hart, a Pennsylvania legislator and captain of the Gray Invincibles, proposed a memorial to the state’s African American military men who had served the United States in wartime.

Philadelphia’s version of this iconic artwork is a cast of the 1902–1904 sculpture. It was installed for the opening of the Rodin Museum in 1929, in front of a façade that replicates the one at Meudon where artist Auguste Rodin’s grave is located.