Commissioned by the Fountain Society, bequest of Maria E. Swann

Surrounded by the swirling auto traffic of the Parkway, three bronze Native Americans recline among soaring jets of water. The fountain was created as a memorial to Dr. Wilson Cary Swann, the founder and president of the Philadelphia Fountain Society, which provided sources of fresh drinking water throughout the city. Its figures represent Philadelphia’s three main waterways: the Delaware and Schuylkill Rivers, and Wissahickon Creek.

The fountain opened to the public on a hot July day in 1924 to the music of the police band, and ten thousand people danced the tango in the surrounding streets.

The fountain was designed by architect Wilson Eyre, Jr., who collaborated with sculptor Alexander Stirling Calder. Calder titled his sculptural ensemble The Fountain of Three Rivers and adapted the time-honored allegorical motif of a reclining nude river god to the region’s geography and Native American history.

The Wissahickon is represented by a Native American girl leaning modestly on her side against an agitated, water-spouting swan. There is a subordinate classical reference here – the story of Leda and the Swan – but the motif also resulted from Calder’s inability to resist a pun on Dr. Swann’s name. For the Schuylkill, a larger stream, Calder created the figure of a mature woman holding the neck of another swan. The largest river, the Delaware, became a powerful male – evidently a member of the Lenni Lenape or Delaware tribe – who reaches above his head to grasp his bow as a leaping fish sprays water over him. To shoot water toward these figures from the surrounding basin, Calder added bronze frogs and turtles. Overall, his energetic animals – especially the ruffled, rather distempered swans – contrast with the calm human figures.

For the fountain’s center Eyre designed a geyser that shot 50 feet into the air, and he staggered or interlaced the other jets and sprays for maximum visual effect. Fittingly, the fountain opened to the public on a hot July day in 1924 to the music of the police band, and ten thousand people danced the tango in the surrounding streets.

Phoebe Adams is an artist recognized for her cast sculptural forms.

Robert Linck is a member of the Philadelphia Fountain Society. 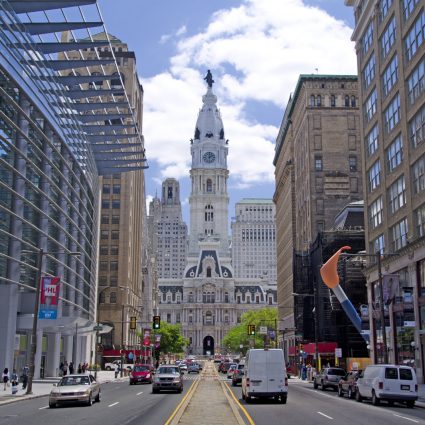