Gift of F. Eugene Dixon to the City of Philadelphia

For the bicentennial celebration in 1976, Robert Indiana lent the city a large aluminum sculpture of his “love” image. Indiana first produced this design as a painting in 1964, and within a few years it had been used on a U.S. postage stamp and innumerable unauthorized jewelry, posters, and plates.

An uproar ensued…local media demanded to know why the sculpture had been allowed to slip away.

The sculpture was installed in John F. Kennedy Plaza not far from City Hall, and for two years after the bicentennial it remained there on “extended loan.” During that time Indiana’s gallery in New York tried to sell the work to the city. When the sale could not be arranged, the gallery had a truck remove LOVE to New York, where a potential buyer was interested in seeing it.

An uproar ensued. The Philadelphia Inquirer and other local media demanded to know why the sculpture had been allowed to slip away.

F. Eugene Dixon, local businessman and then chairman of the Philadelphia Art Commission, purchased the work and donated it to the city, and soon it was reinstalled in the Plaza, now affectionately referred to as LOVE Park.

In February 2018, after a year out of public view for conservation and to allow for the redesign of LOVE Park, LOVE returned to the plaza but with a new color scheme of red, green, and purple – not blue. The City of Philadelphia discovered that sections of the sculpture had been incorrectly painted blue during previous restorations. Representatives of the artist informed the City of the original color scheme and archival photographs from Temple University confirmed the original use of purple instead of blue.

Did you know that LOVE is a sculpture, not a statue? A statue is a specific kind of sculpture – one that represents a person or animal (figurative). All statues are sculptures, but not all sculptures are statues!

Robert Indiana (1928-2018) is the American painter and sculptor who created the iconic LOVE sculpture.

This artwork is part of the Along the Benjamin Franklin Parkway tour, and the Around City Hall tour. 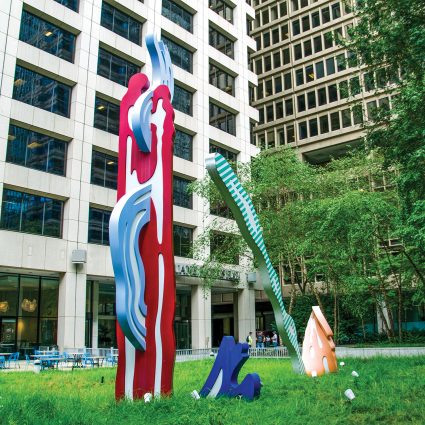 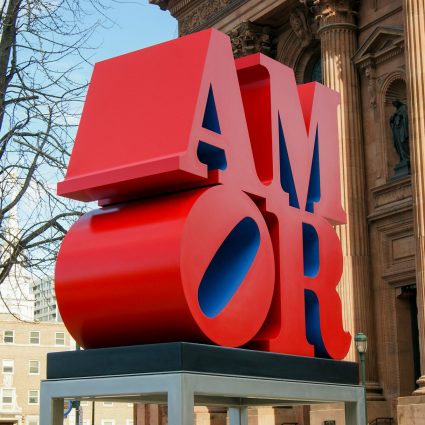 LOVE and the Passing of Artist Robert Indiana