Gift of the Leidy Memorial Committee to the City of Philadelphia

Joseph Leidy (1823-1891), a leading figure at the Academy of Natural Sciences, is known as the “father of American vertebrate paleontology.” He was born in Philadelphia and later studied medicine and anatomy at the University of Pennsylvania, where, in 1853, he was elected professor of anatomy. Recognized as the foremost American anatomist of his time, he served as President of the Wagner Free institute of Science and of the Academy of Natural Sciences.

Following Leidy’s death in 1891, a group of “public spirited citizens” resolved to erect a statue to his memory. Samuel Murray was awarded the commission and represented Leidy “in a sack coat because Dr. Leidy scorned the dictates of fashion and was always carelessly attired.” Leidy is also shown holding the jawbone of an Ice Age lion that he identified. Originally installed at City Hall’s West Plaza in 1907, the sculpture was relocated to its present site in 1929.

Dr. Edward B. Daeschler is Curator of Vertebrate Zoology and Paleontology at The Academy of Natural Sciences.

Kent Ullberg is a sculptor and curator of natural history who created Deinonychus.

Dr. Leonard Warren (1925-2019) is the author of the biography Joseph Leidy: The Last Man Who Knew Everything. 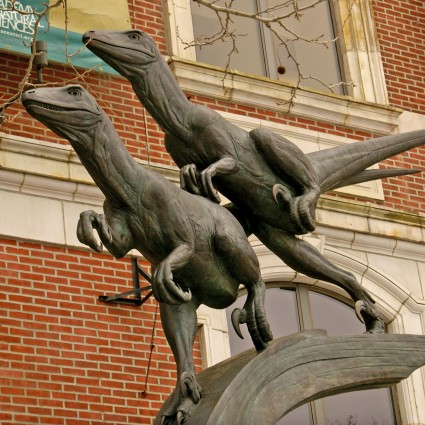