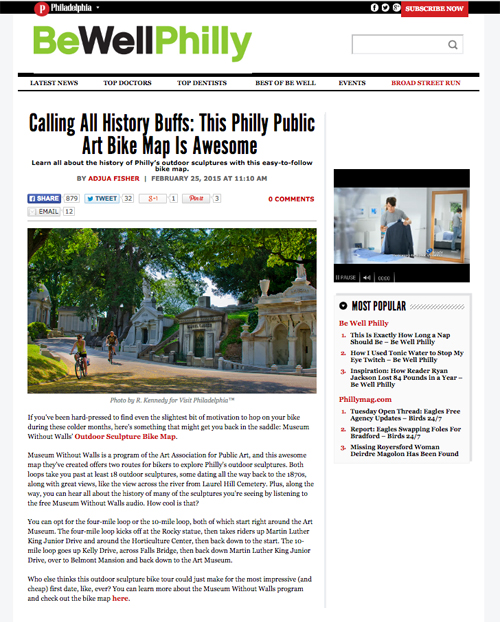 Created in collaboration with the Bicycle Coalition of Greater Philadelphia, the Association for Public Art‘s handy Public Art Bike Map with Museum Without Walls™: AUDIO sculpture stops was recently featured in Philadelphia Magazine’s Be Well Philly blog, praised as an awesome, easy-to-follow bike map that lets cyclists learn about the history of Philly’s outdoor sculptures. The article notes that the bike routes (a 4-mile or 10-mile loop) offer great views throughout Fairmount Park and would make for an impressive and cheap first date!

An Art Nouveau-style bronze sundial atop a sculpted limestone base representing the four seasons. Spring holds a rose; Summer carries poppies; Autumn wears grapes in her hair; and Winter has a pine branch.

The Smith Memorial Arch was initiated by Richard Smith, a wealthy Philadelphian who bequeathed a half million dollars to build a monument to Pennsylvania’s naval and military heroes of the Civil War.

A memorial in Fairmount Park to General Meade, best known for defeating General Robert E. Lee at the Battle of Gettysburg.

This sculpture is based on the 3rd century BCE Greek original, which was lost in antiquity. The men are engaged in the Greek sport pankration.