UPDATE Fall 2021: The City of Philadelphia has chosen Design Workshop to lead the redesign of the Parkway >>

The City of Philadelphia is preparing a major redesign with permanent upgrades for the Benjamin Franklin Parkway that will prioritize pedestrians and “dramatically improve the safety, functionality, and beauty of the Parkway.” The move follows a series of recommendations made by PennPraxis in its More Park, Less Way plan published in 2013.

[The Association for Public Art’s Executive Director] encouraged the teams to be bold, inventive, and allow space for public art to play a role in this new iteration of the Parkway.

With support from the William Penn Foundation, the City (led by Philadelphia Parks & Recreation and the Office of Transportation, Infrastructure, and Sustainability) launched an international open call in March and invited three design teams – Design Workshop, DLANDStudio + DIGSAU, and MVRDV – to develop and share their conceptual plans for the Parkway. The teams presented their proposals to the public (video below) as part of a “Parkway Ideas Workshop,” and the City will select one team to carry out its vision. The City also released a public survey to get feedback about the presentations, which will be shared with the chosen finalist.

The Association for Public Art (aPA) was one of a number of groups invited to meet with the design teams on the Parkway to discuss its future. Penny Balkin Bach, aPA’s Executive Director & Chief Curator, encouraged the teams to be bold, inventive, and allow space for public art to play a role in this new iteration of the Parkway. Bach shared with the teams how aPA has worked in this spirit for years as one of the early players who helped activate the Eakins Oval space on the Parkway (“The Oval”) through bold and inviting public art experiences. In 2012, aPA commissioned Rafael Lozano-Hemmer’s OPEN AIR interactive light installation for the Parkway and turned what later became The Oval into an outdoor living room for viewing; and in 2014, aPA collaborated with Philadelphia Parks & Recreation to install Candy Coated’s Magic Carpet, a whimsical environment filled with color, pattern, illusion, and movement for summer fun at The Oval.

Founded in 1872, the Association for Public Art (formerly the Fairmount Park Art Association) has a unique and significant relationship to the Parkway that goes back more than a century, from commissioning the first comprehensive plan for the Parkway in 1907, to placing and caring for permanent outdoor sculptures, to presenting these large-scale public art installations.

Learn more about our role on the Parkway ›› 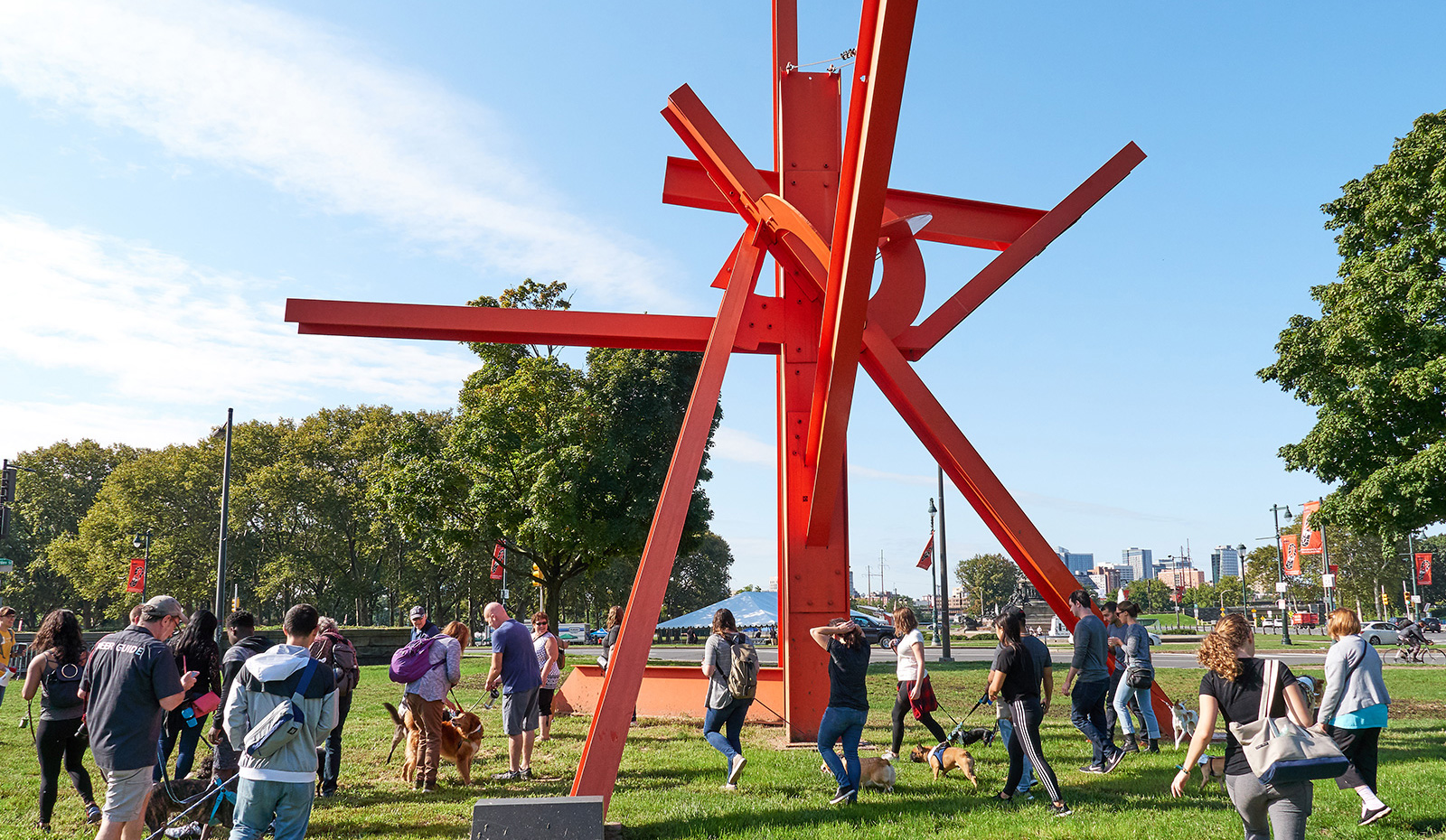 Become a member to support our work! You’ll help us provide Art for Everyone, Anytime.

“Sculpture,” said Henry Moore, “should always at first sight have some obscurities, and further meanings.”

The Oval, in front of the Philadelphia Museum of Art

For summer 2014, artist Candy Coated temporarily transformed The Oval in front of the Philadelphia Museum of Art into a magical environment of color, pattern, illusion, and movement.

Hand-fabricated from thousands of pieces of stainless steel pipe, plate, and rods, Symbiosis is part of Roxy Paine’s “Dendroid” series.

A memorial to the French heroine, the French community in Philadelphia sought the aid of the Fairmount Park Art Association (now the Association for Public Art) to commemorate their centennial.