For the Ellen Phillips Samuel Memorial, the trustees of the Fairmount Park Art Association (now the Association for Public Art) imagined a large bronze representing America’s “Constructive Enterprise” – ”the vigor, the power of harnessed nature, or the strength of men harnessing nature and making it conform to their uses and desires.”

“Here, the eternal battle has ended, and man and bird are united in a common purpose.”

The commission was granted in 1950 to Jacques Lipchitz. After numerous studies, the casting in 20 separate pieces began and the massive bronze was installed in the Memorial’s North Terrace in 1960. It was moved to the Central Terrace in 1986 to increase its visibility from Kelly Drive.

Lipchitz’s powerfully optimistic treatment reflects his life-long idealism. The muscular pioneer surges forward, one hand shading his eyes as he scans the horizon, the other holding a caduceus. Echoing his movement is a great eagle, wings outstretched. The link with his Prometheus Strangling the Vulture located outside the Philadelphia Museum of Art is apparent, and many have been tempted to connect the two: here, the eternal battle has ended, and man and bird are united in a common purpose. Lipchitz was particularly pleased by the quotation from Theodore Roosevelt inscribed on the pedestal: “Our nation, glorious in youth and strength, looks into the future with fearless and eager eyes, as vigorous as a young man to run a race.”

Penny Balkin Bach is the former Executive Director & Chief Curator of the Association for Public Art and the author of many books and articles about Philadelphia’s public art. 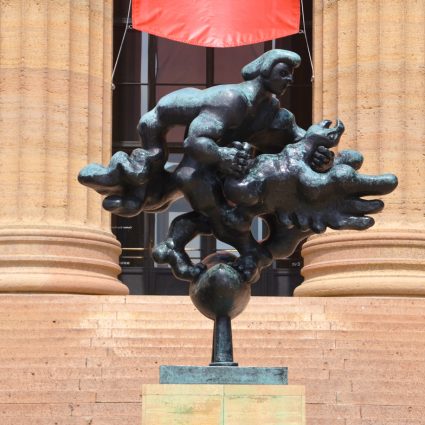 Carl Milles’ Playing Angels: A Slice of Sweden in Philadelphia