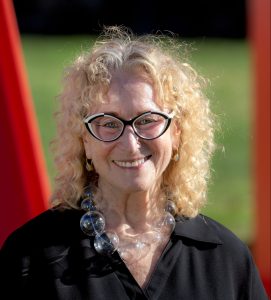 Something of a public art movement has taken hold in this country in the 40 years since Penny Balkin Bach joined the Association for Public Art (aPA) in 1980. Bach has played a major role in the maturation of the field. Most critically, early on she posed questions about public art and community that today echo ever louder as issues surrounding public monuments spill over into the mainstream.

The Association, formerly the Fairmount Park Art Association, is celebrating its 150th anniversary this year. It was chartered in 1872 as the nation’s first organization devoted to public art and has evolved over time to become one of the few non-profits in the U.S. that preserves historic works as well as commissions new ones, and interprets a vast collection of public art.

“So many of the projects that Penny spearheaded at aPA were firsts in the practice of public art,” says Barbara B. Aronson, president, Board of Trustees, who continues, “It’s remarkable how she took a local organization, albeit one located in a city celebrated for its monuments, and transformed it into a national influencer.”

Says Bach, “As I look back, I’m eternally grateful to the Association’s Board for allowing me to do extraordinarily experimental and thought-provoking work, which brought the Association closer to so many artists, scholars, designers and, most of all, people passionate about Philadelphia.”

One of Bach’s first initiatives as executive director was to organize a landmark conference with the Pennsylvania Academy of the Fine Arts that resulted in the Association’s ongoing outdoor sculpture conservation program, the first of its kind in the nation. Soon after she organized a pivotal nation-wide summit where public art advocates convened to hear from innovators in architecture, landscape design, urban planning, law, art, and the performing arts.

In 1980, she spearheaded a commissioning program entitled “Form and Function,” whose goal was to integrate art into communities by way of use as well as placement, challenging the artist’s role as creative problem solver. The dialogue that began there led to “New·Land·Marks,” a 1992 program conceived to incorporate public art into ongoing community development, greening, and revitalization. Both of these efforts celebrated community identity, commemorated “untold” histories, and offered visionary, yet reasonable, ways to invigorate public spaces.

Under Bach, the Association sprang into action to call attention to a neglected masterpiece, All Wars Memorial to Colored Soldiers and Sailors (J. Otto Schweizer, 1934), resulting in the return of the sculpture to its rightful place along the Benjamin Franklin Parkway. Over the course of four determined years, the Association represented the public interest to keep The Dream Garden, Maxwell Parrish’s exquisite mosaic, in place and in the public eye.

Bach’s tenure has been marked by increased exploration of innovative approaches to public art and its audiences. One of the most visible is Museum Without Walls: AUDIO, an award-winning interpretive program for outdoor sculpture that can be accessed, night or day, for free, by cell phone, audio download, or on the web. Listeners learn about the complex histories and untold stories behind public art in Philadelphia from an array of different voices and viewpoints.

In December, the Association will launch its unique and irreplaceable historic archive online, where it will be available to scholars and the public for free. The Fairmount Park Art Association/Association for Public Art Digital Archive tells the story of the ideals, debates, and decisions that have shaped public life in Philadelphia via minutes from board meetings, annual reports, and photographs from 1871 to1982.  Bach will be presenting this history at the Association’s 150th Annual Meeting at Moore College of Art & Design, where she will also be awarded the organization’s historic Medal of Honor.

Penny Balkin Bach has written extensively about public art, including Public Art in Philadelphia (Temple University Press, 1992); lectured widely; and participated in many public art juries and advisory committees. She has received many awards, including the national PAD award, from the Public Art Dialogue (an affiliate of the College Art Association), in recognition of longstanding contributions to the field.

Before coming to the Association, Bach was part of the team that established the Parkway Program, a “school without walls” that used Parkway institutions as learning environments for high schoolers. She then joined the Philadelphia Museum of Art to develop its first Department of Community Programs and began working with artists to create large-scale installations that related to the outdoor spaces around the Museum.

“I had no idea that for my entire early professional career I was in training for this rare opportunity to combine my hybrid interests in art, civic engagement, education, and urban design,” she concludes.

Philadelphia Inquirer: “After 42 years of defining what art means to Philly, Penny Bach is retiring”