In the words of the Fairmount Park Art Association’s (now the Association for Public Art) Samuel Memorial committee, the second principal relief in the South Terrace of the Ellen Phillips Samuel Memorial was to be “an expression of the agreement among the American people to make and abide by their own laws, free of outside control.” The commission was awarded to Henry Kreis, who had emigrated from Germany in 1923.

A former assistant to Paul Manship and Carl Paul Jennewein, Kreis created sculptures for public buildings in many American cities. As the committee suggested, Kreis avoided such well-worn visual symbols as the Liberty Bell and the signing of the Declaration of Independence. Instead his monument shows three male figures of varying ages, signifying the agreement of young and old to forge a self-governing republic.

After the second Sculpture International in 1940, the committee selected four sculptors to express the governing themes of the new South Terrace – the settlement of the eastern coast and the emergence of the United States as an independent, democratic nation. The two principal groups were carved as reliefs, the other four sculptures as free-standing figures. 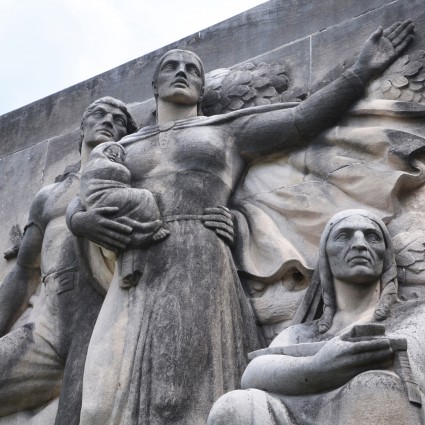