On loan to the Trustees of the University of Pennsylvania, courtesy of Mr. and Mrs. Jeffrey Loria

The influential Cubist sculptor Alexander Archipenko did not normally work on a monumental scale. But shortly before his death in 1964 he completed a 4-foot King Solomon that was designed for enlargement. Instructions were left with his widow, who supervised the casting of a 14.5-foot, 1.5-ton version in 1968. In 1985 this majestic bronze came to the University of Pennsylvania campus on extended loan from Mr. and Mrs. Jeffrey Loria, the parents of a Penn student. Mixing hard angles with hollow curved spaces, King Solomon clearly recalls Archipenko’s Cubist origins. The sculpture suggests a figure of the Old Testament monarch dressed in a robe, posed in a forceful stance with one foot forward. 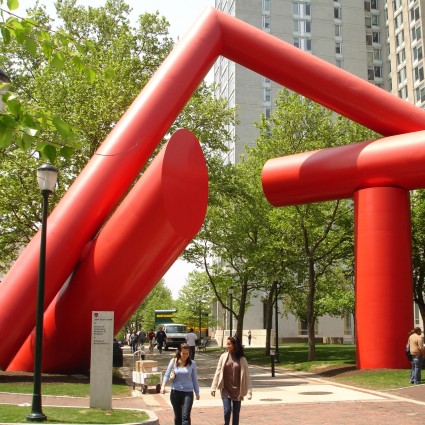 Benjamin Franklin (on a bench)