Gift of Justus C. Strawbridge to the City of Philadelphia

When artist John J. Boyle was commissioned by Justus C. Strawbridge to create a statue of Benjamin Franklin, he was one of Philadelphia’s most prominent sculptors. (His works include Stone Age in America on Kelly Drive and John Christian Bullitt at City Hall.) Boyle based his renderings of Franklin on extensive research. His portrait was based upon a bust by Jean Antoine Houdon (though Boyle’s version is a younger Franklin), and his clothing was derived from the Duplessis portrait, showing a heavy fur-trimmed surtout covering the plain clothes of the period.

The statue was given to the city of Philadelphia by Strawbridge and installed in front of the post office at 9th and Chestnut Streets. It was in 1938 that the city donated the sculpture to the University of Pennsylvania, one of the many institutions that Franklin helped to found. The pedestal is by Frank Miles Day in collaboration with Boyle.

Benjamin Franklin (on a bench) 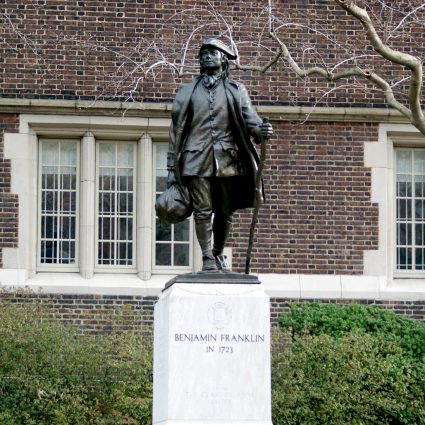 Benjamin Franklin in 1723 (or The Young Franklin)

Benjamin Franklin in 1723 (or The Young Franklin) full content 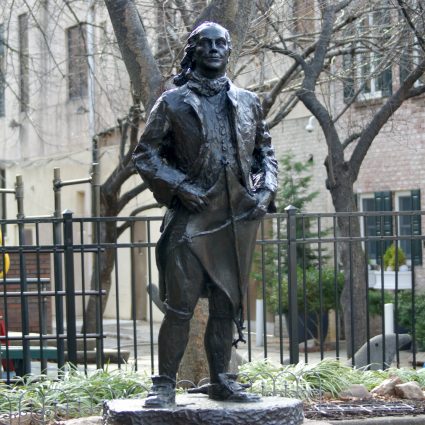