This oversized 9′ bronze statue of Francis Lazarro “Frank” Rizzo, Sr. (1920-1991) once stood on the steps of the city’s Municipal Services Building across from City Hall from 1998-2020. Rizzo was a divisive and controversial figure known for his racist and discriminatory law-and-order style and policies. He served Philadelphia as policeman, Police Commissioner (1968-1971), and two-term mayor (1972-1980).

Even before it was installed, there was heated debate over the placement, removal, and relocation of the statue.

On June 3, 2020, after days of Black Lives Matter protests following the death of George Floyd, and mounting pressure for the statue to be taken down, it was removed by the city in the early morning hours. The statue was placed into storage where it will remain until further notice.

“The statue is a deplorable monument to racism, bigotry, and police brutality for members of the Black community, the LGBTQ community, and many others. The treatment of these communities under Mr. Rizzo’s leadership was among the worst periods in Philadelphia’s history,” Philadelphia Mayor Jim Kenney said in a statement. “The battle for equal rights and justice is still being fought decades later, and our city is still working to erase that legacy. We now need to work for true equity for all Philadelphia residents, and toward healing our communities. The removal of this statue today is but a small step in that process.”

Even before it was installed, there was heated debate over the placement, removal, and relocation of the statue. Finally, in 2017, after a call for public input, the city agreed to relocate the statue during the planned Municipal Services Building Plaza renovation in 2021.

Commissioned by the Frank L. Rizzo Monument Committee, the statue was donated to the city paid for by private contributions from his family, friends, and supporters. It was created by figurative sculptor Zenos Frudakis, who studied at the Pennsylvania Academy of the Fine Arts. Ironically, it was installed near the sculpture Government of the People that Rizzo publicly criticized, calling it a load of dumped plaster. 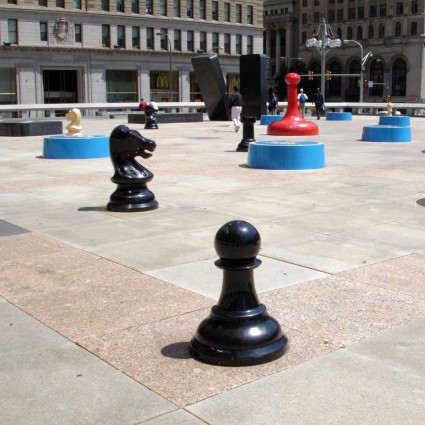