Giant-sized fiberglass, concrete, and steel versions of checker pieces, chess pieces, dominoes, bingo chips, and board game pieces (including Monopoly and Parcheesi) are scattered all over Philadelphia’s Municipal Services Building Plaza. Artist Roger White said the installation is based on the idea that “games are the mirrors of our paths through life. They symbolize the interaction between people and serve as a point of community, as well as a childhood activity and adult responsibility.”

The sculpture was commissioned by the City of Philadelphia’s Office of Arts and Culture as part of the Percent for Art Program when the Municipal Services Building was renovated. The project was installed in 1996 near Jacque Lipchitz’s Government of the People, across the street from LOVE Park. 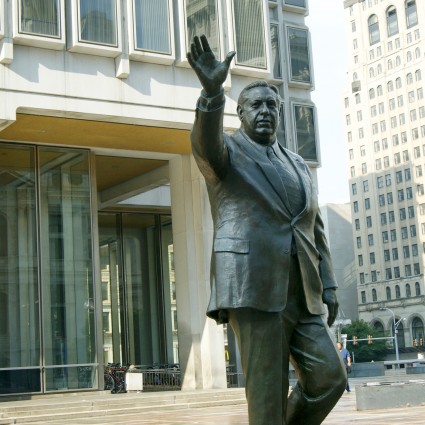