The Duck Girl was first exhibited in 1914 at the Pennsylvania Academy of the Fine Arts, where it won the Widener Gold Medal.

The Fairmount Park Art Association (now the Association for Public Art) purchased one of two casts from the artist and installed Duck Girl in Cloverly Park, at Wissahickon Avenue and West School House Lane, in 1916. The sculpture was damaged and moved to storage in 1956, but rescued by the Rittenhouse Square Improvement Association and relocated to the Square in 1960, where it continues to delight the visiting public. Poised in a Greek dress, the figure draws on classical imagery – characteristic of Paul Manship’s earlier works. His later work, Aero Memorial, was installed at Logan Square.

Major Jackson is a poet who was born and raised in Philadelphia. His poem “Duck Girl on the Occasion of Spring” was commissioned and performed by Philadelphia’s Concerto Soloists.

Dr. Susan Rather is Associate Professor of American Art History at the University of Texas at Austin. She is the author of Archaism, Modernism, and the Art of Paul Manship.

Robert Cozzolino is the former Senior Curator and Curator of Modern Art at the Pennsylvania Academy of the Fine Arts, where Paul Manship studied and exhibited. 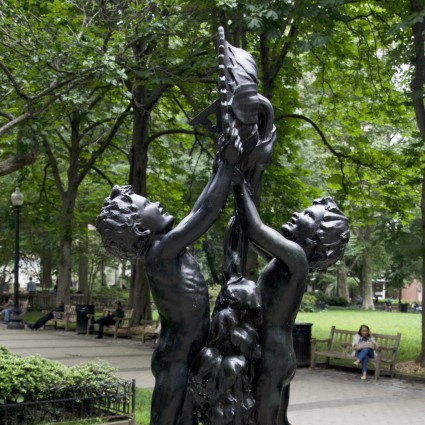