Gift of the Government of Venezuela to the City of Philadelphia

Even on a windless day the cape swirls around this hero of three revolutionary wars. As a young man, Francisco de Miranda (1750-1816) commanded Spanish forces in support of the American Revolution. Later the native Venezuelan led troops in the French Revolution. He is especially famous, though, for his efforts to free Latin America from Spain. Briefly he led an independent Venezuela until Spain counterattacked. He died in Spanish prison.

The Venezuelan government commissioned this bronze sculpture as a gift to the City of Philadelphia.

Emilio Buitrago is the President of Casa de Venezuela, an organization dedicated to promoting the culture and traditions of Venezuela in the greater Philadelphia region.

Karen Racine is Associate Professor of History at University of Guelph in Toronto. Her research centers on the history and culture of the revolutionary independence period throughout Latin America and the Atlantic World.

Dr. Angelo Rivero Santos was the Charge d’Affaires of the Bolivarian Republic of Venezuela to the United States of America. 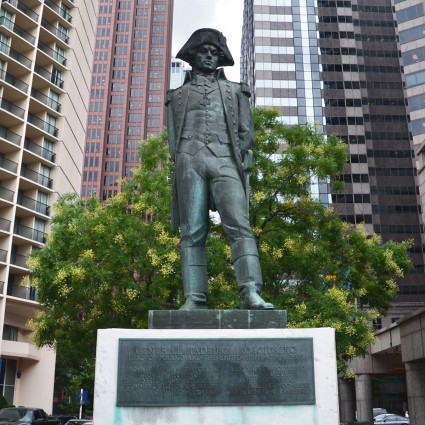