Commissioned and owned by the City of Philadelphia

Even while the nation was engaged in World War I, Philadelphia decided to commemorate the Civil War. The city appropriated funds for a memorial, and Hermon Atkins MacNeil was selected for the commission.

MacNeil was born in Massachusetts and worked in Paris. Returning to the United States, he was among the first American artists to look to his native terrain for sculptural subjects, particularly the American Indian. He traveled in the Southwest and won numerous awards for his renderings of Native Americans.

These two pylons – one depicting sailors, the other soldiers – were intended to stand as gates to the “Parkway Gardens.” They were moved to accommodate the construction of the Vine Street Expressway, but still mark the entry to the park from the city. One of the inscriptions reads: “In giving freedom to the slave, we assure freedom to the free.”

Alan Greenberger is an architect and Fellow at the Lindy Institute for Urban Innovation at Drexel University. He is a Trustee of the Association for Public Art, Chair of the Philadelphia Art Commission, and former Deputy Mayor for Planning and Economic Development and former Commerce Director.

Allen C. Guelzo is the Senior Research Scholar in the Council of the Humanities at Princeton University. He is the former Director of the Civil War Era Studies Program at Gettysburg College.

Sarah McEneaney is a painter in Philadelphia who studied at the Pennsylvania Academy of the Fine Arts. 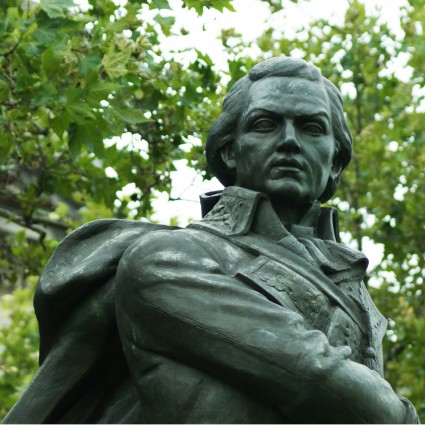