Imagine Philadelphia without the Benjamin Franklin Parkway, City Hall or the Art Museum. Imagine Kelly Drive as a dirt road with carriages. This is the Philadelphia of a century and a half ago, when a group of citizen-leaders stepped forward to establish the nation’s first organization devoted to public art. 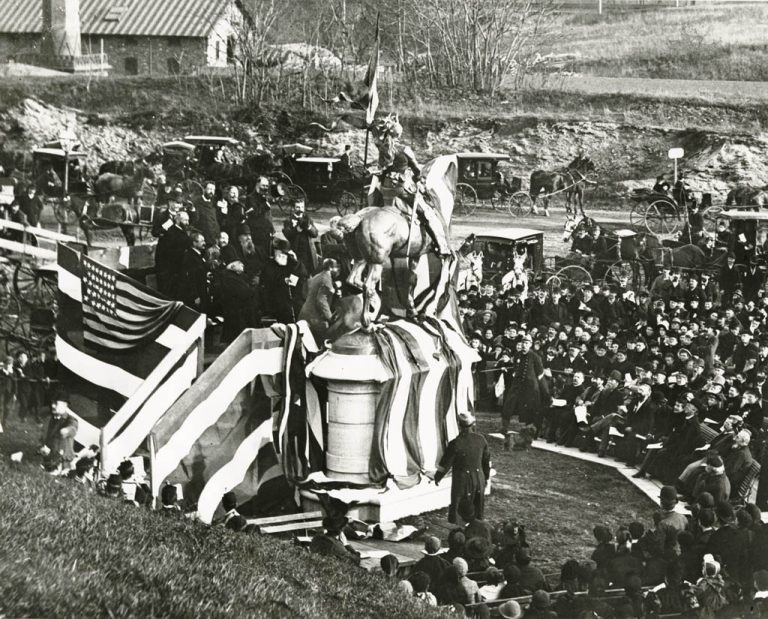 Dedication of Joan of Arc by Emmanuel Frémiet in 1890

Beginning this month, Philadelphians are invited to celebrate the legacy of that organization, once called the Fairmount Park Art Association (FPAA) and now the Association for Public Art (aPA), one of only a few non-profits in the nation that concurrently commissions new art for the public realm, preserves historic artworks, and interprets a vast collection.

The public is invited to attend virtual talks by a number of the most innovative thinkers in contemporary art today and participate in walking tours designed to newly illuminate some of the city’s most storied pathways. In September, the Association welcomes back a newly restored and iconic sculpture to the Parkway and in December unveils an entirely new digital archive of institutional history. By way of minute books, reports, vintage photographs and ephemera, the archive not only tells the story of public art in Philadelphia over the last century and a half, but that of American art history as well.

“The longstanding efforts of the Association for Public Art have helped to position Philadelphia as the public arts capital it is today,” said Mayor Jim Kenney. “The projects and initiatives APA puts forth create a valuable experience for residents and visitors alike. I’m looking forward to seeing new efforts they have on the horizon.”

Says Penny Balkin Bach, executive director and chief curator of aPA, “Public art is inherently dynamic, and this year we’ll be actively participating in essential civic discourse that engages the consequential issues of today—representation, race, gender, power and the challenges of stewardship.” She continues, “We will also be continuing the process of bringing new art to the city.”

On September 20, 2022, Mark di Suvero’s monumental steel sculpture Iroquois returns to the Benjamin Franklin Parkway after being removed for almost five months, undergoing its first major conservation treatment since arriving in Philadelphia a decade and a half ago. After being carefully disassembled, stripped of its paint, reinforced with new welding, re-primed and repainted, the gravity defying choreography of bright red-orange steel beams will once again delight passers-by.

Throughout its history, aPA has convened leading thinkers and doers. This roster reads like a snapshot of changing attitudes in culture and art, including as it does Edward Muybridge, Frederick Law Olmstead, Sir Kenneth Clark, Robert Moses, Claes Oldenburg and Coosje van Bruggen, Christo and Jeanne-Claude, and James Turrell, among a hundred or so others.

This fall aPA presents four free virtual talks by leading contemporary figures in the arts in Insights: The Future of Public Art:

In October a series of walking tours explore the art, architecture, history and landscape of the Benjamin Franklin Parkway, including the complicated stories of its early years and ongoing social justice confrontations.

A Behind-the-Scenes View of Public Art in Philadelphia

In December the Association launches the FPAA/aPA Digital Archive on its website, making public for the first time its unique and irreplaceable collection of annual reports and minute books documenting board meetings from 1871 through 1982. These materials record early debates around commissions, discussions with artists, decisions relating to sculpture locations, and collaborations with local government and cultural institutions. The annual reports feature addresses by distinguished speakers and historic photographs.

The FPAA/aPA Digital Archive chronicles the people, processes, issues and controversies of the times. A viewer can read about the commission awarded to Alexander Milne Calder in 1887 for what is perhaps the first memorial erected of a civil war hero, Major General George Gordon Meade or Frederic Remington’s insistence that he could not accept the proposed location for his only large-scale bronze (Cowboy, 1908) until he arranged for a horseman to pose for him at that spot.

The aPA anticipates that free and easy access to the archives will serve researchers, public art professionals, students, curators, historians, members of the media, and the general public.

The Association for Public Art grew out of the perceived need to counteract the uniformity of the burgeoning commercial development of the 1870s and the anticipation of the 1876 Centennial Exposition to be held in Philadelphia. By charter, the then Fairmount Park Art Association was incorporated to “promote and foster the beautiful in Philadelphia, in its architecture, improvement and general plan.”

This expansive vision led the Association to prepare a conceptual plan for the Benjamin Franklin Parkway in 1907. Some ten years later the plan was realized by the beaux arts landscape designer Jacques Gréber. As well, it was the Association that established a committee to consider a ‘Municipal Art Gallery,’ which led directly to the creation of the Philadelphia Museum of Art.

Works of art commissioned and acquired by the Association since the early 1870s reflect the history of American sculpture and patronage, beginning with sculptures showing a reverence for the antique and leading up to contemporary performative and installation works by such international artists as Cai Guo-Qiang.

That for decades the aPA has supported the development of boundary-expanding ideas about public art is evident in works by such practitioners as Cai Guo-Qiang, Rafael Ferrer, Siah Armajani, Rafael Lozano-Hemmer, and Jennifer Steinkamp, among many others.

Concerned about the impact of acid rain and other vagaries of outdoor installation, in 1982 the Association began a conservation initiative that today is the longest continuously operating program in the nation. The plan of action calls for regular condition audits, maintenance and treatment by professional conservators.  Each year in the late spring, a number of sculptures are cleaned, protected and stabilized; and aPA also responds to emergencies related to its commissioned artworks.

The Association has long devised innovative ways to reach new audiences. In 2010, it introduced Museum Without Walls: Audio, an award-winning program that allows anyone, anywhere, to instantly access via phone, app or computer – for free – the fascinating stories behind 75 outdoor sculptures. The program expands opportunities for interpretation to include a diverse range of viewpoints, from community residents to experts in academia.

Finally, as an advocate for public art, aPA works publicly and behind-the-scenes to protect threatened works of art; uphold freedom of speech; and address the consequential timely issues, whether the role of monuments in contemporary society or cultural and gender representation in urban public spaces.