Back on the Parkway decades later in new public park

After spending more than 25 years out of public view, Gerhard Marcks’ bronze Maja sculpture (pronounced \MAI-uh\) was installed in March 2021 in a new public park – named Maja Park – coming soon to the Benjamin Franklin Parkway at 22nd Street. The Association for Public Art (aPA), which purchased Maja in 1949, had been waiting for the right opportunity and appropriate site to reinstall the sculpture, which once stood atop the steps of the nearby Philadelphia Museum of Art for decades. The development of Maja Park, designed by Ground Reconsidered, has been a private/public partnership between AIR Communities, which owns the adjacent Park Towne Place Museum District Residences, and Philadelphia Parks & Recreation, with support from the Commonwealth of Pennsylvania. See all project partners ››

Maja first enjoyed the limelight in Philadelphia in 1949 at the Association for Public Art’s Third Sculpture International Exhibition at the Philadelphia Museum of Art, where the sculpture was exhibited prominently at the top of the Museum’s steps. This series of sculpture exhibitions in 1933, 1940, and 1949 featured works by hundreds of sculptors from around the world, and was organized by the Association to introduce the public to contemporary sculpture and to identify artists for the Ellen Phillips Samuel Memorial on Kelly Drive. The Association also purchased a number of sculptures from these exhibitions, including Maja. Created in 1942 and cast in 1947, Maja was considered a particularly significant sculpture in the third exhibition, which also included works by Alexander Calder, Jacques Lipchitz, Pablo Picasso, and Barbara Hepworth. It was widely seen by sculptors and critics as one of the most important exhibitions in the world at the time.

Maja left Philadelphia soon after to be part of a notable exhibition in 1952, Sculpture of the Twentieth Century, organized by the Museum of Modern Art (MoMA) in New York. According to Andrew Carnduff Ritchie, Director of the Museum’s Department of Painting and Sculpture, the exhibit was intended to “give as comprehensive a view as possible of twentieth-century sculpture in all its richness and variety of expression.” The Philadelphia Museum of Art was the first venue for the Sculpture of the Twentieth Century exhibition, which then traveled to the Art Institute of Chicago and culminated at MoMA in 1953. When Maja returned to Philadelphia, the sculpture was installed by the Association on the East Terrace of the Philadelphia Museum of Art until 1992, when it was removed and placed in storage along with other nearby sculptures due to the renovation of the terrace.

To ready the sculpture for installation in a public park, Maja required extensive conservation to restore the bronze and protect the artwork from the outdoor elements. A state-of-the-art laser treatment was performed to delicately and meticulously remove the sculpture’s streaky surface corrosion, and a special wax coating was then applied to protect the bronze from further deterioration. To develop a treatment approach, the conservator on the project first consulted other casts of Maja, which can be found at the Franklin D. Murphy Sculpture Garden on the UCLA campus; outside Kunsthalle Emden in Germany; at the Kunst Museum Winterthur in Switzerland; and in other collections. More about the conservation ››

Gerhard Marcks (1889-1981) was a German sculptor, printmaker, and designer who helped revive the art of sculpture in Germany in the early 20th century. Marcks held teaching positions at the Bauhaus (1919-1925) and the Halle School of Arts and Crafts (1925-1933). In 1933, Nazis dismissed Marcks from his teaching post after he tried to protect a Jewish student from persecution and protested when his Jewish colleagues were fired. The Bauhaus – a school of art and design whose members wanted to shape the future of Germany both politically and artistically – was seen as a threat to the Nazi regime. More on Gerhard Marcks ››

This installation of Maja calls attention to the resolve of artists working under duress or persecution. In 1937, the Nazi party held two art exhibitions in Munich – The Great German Art Exhibition, which was meant to show works that Adolf Hitler approved of, and The Degenerate Art Exhibition, which was meant to teach the public about the “art of decay.” Hundreds of works that were seen as too modern, expressionistic, or by Jewish artists were included in the latter exhibition, including Gerhard Marcks’ own sculptures. Although Marcks was creating figurative work, it was considered by the Nazis to be too expressive, disproportionate, and not about a German ideal. Marcks was then barred from exhibiting or selling his sculptures, and a number of his artworks were subsequently confiscated, melted down, and repurposed for war materials.

Marcks later relocated his studio to Berlin, where he continued to create new sculptures. In November 1943, a bomb destroyed his home and many of his sculptures were left in pieces, but Maja miraculously survived. Walter Gropius, Bauhaus founder, said of his colleague and friend, “…his human qualities, guided him through hell and high water when a bomb destroyed his house, his studio, and his work, and when the Nazis called him degenerate, forbidding him to work. His spirit, though, could not be crushed and guided him to today’s broad recognition.”

Labeled a “degenerate artist” by Nazis, many of Marcks’ sculptures were destroyed during WWII

Born in Berlin, Gerhard Marcks (1889-1981) was a German artist who helped revive the art of sculpture in Germany in the early 20th century. He is primarily known for his sculptures, but also for his drawings, woodcuts, lithographs, and ceramics. His figurative artworks, like Maja, never seem heroic or laden with pathos, but instead reflect humanistic moods and a quiet behavior.

Although Marcks was creating figurative work, it was considered by the Nazis to be too expressive, disproportionate, and not about a German ideal.

Marcks held teaching positions at both the Bauhaus (1919-1925) and the Halle School of Arts and Crafts (1925-1933). In 1933, the Nazis dismissed Marcks from his teaching post after he tried to protect a Jewish student from persecution; and in 1937, they declared his work “degenerate,” barring him from exhibiting and confiscating and destroying many of his  works.  In 1943, Marcks studio in Berlin was bombed, which left many of his sculptures in pieces. Marcks wrote, “Before God every genuine work of art is eternal because its creation is a divine gift. Once it is set in material and the act of creation is completed, it can be left to the process of decay. Any loafer can destroy a work of art but he cannot undo the intellectual act.”

After World War II, Marcks continued to work as an artist, creating noted artworks of animals as well as a number of memorials for soldiers and civilians who died during the war. His public works can be found in cities throughout Germany, including Cologne, Hamburg, Mannheim, and Frankfurt. In 1969 and 1971 respectively, The Gerhard Marcks Foundation and House were founded in Bremen, Germany, commemorating his work as an artist.

Walter Gropius, Bauhaus founder, said of his colleague and friend, “. . . his human qualities, guided him through hell and high water when a bomb destroyed his house, his studio, and his work, and when the Nazis called him degenerate, forbidding him to work. His spirit, though, could not be crushed and guided him to today’s broad recognition.”

Every sculpture has a story 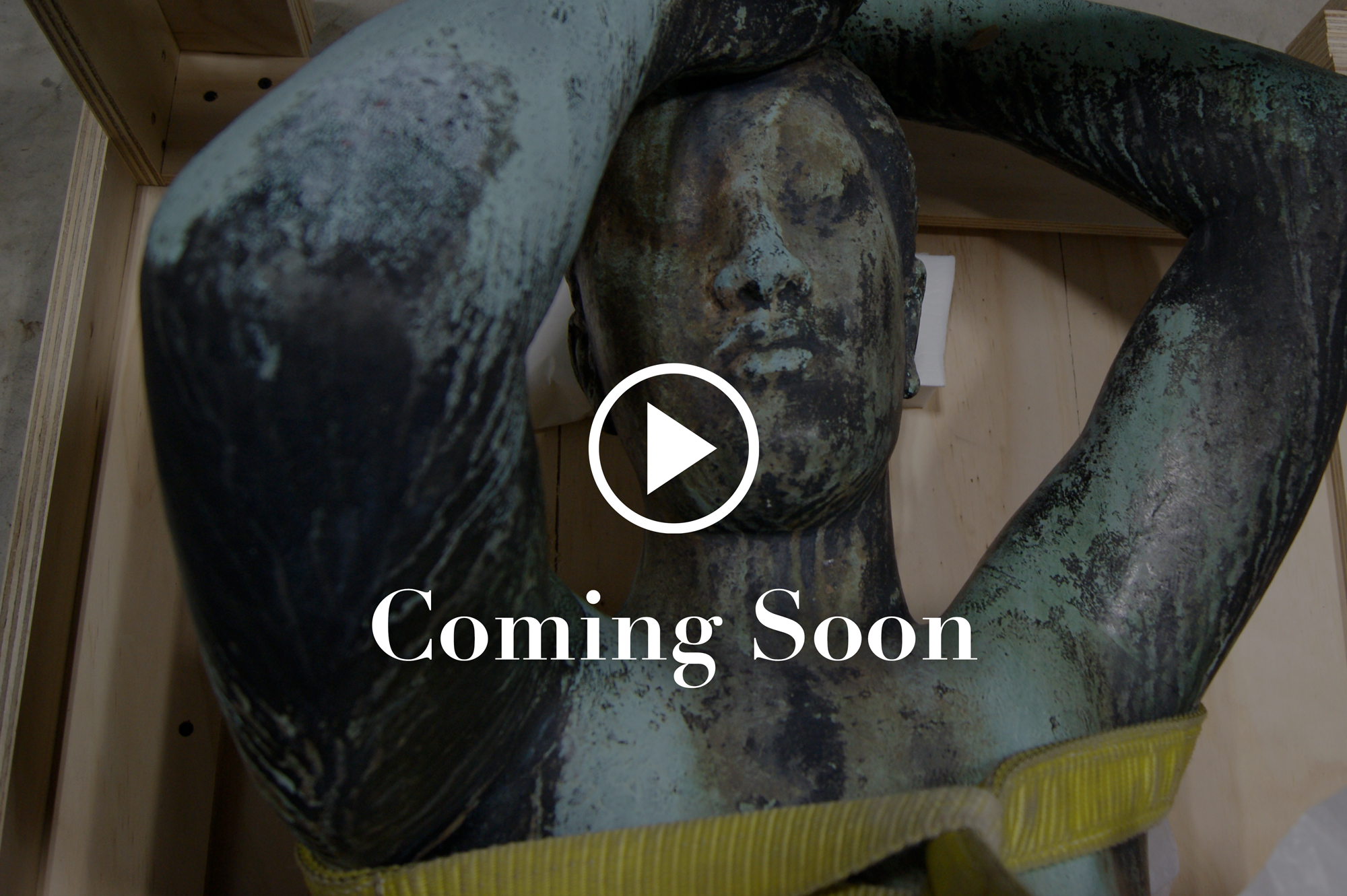 Dr. Arie Hartog is Director and former Curator of the Gerhard Marcks Haus in Bremen, Germany, which houses a substantial collection of works by artist Gerhard Marcks. His research focus is the history of 20th century sculpture.

Patricia C. Phillips is the Chief Academic Officer and Academic Dean of Moore College of Art & Design. She is a public art scholar, curator, art critic, and an aPA trustee.

Museum Without Walls™: AUDIO is the Association for Public Art’s award-winning audio program for Philadelphia’s outdoor sculpture. Available for free by cell phone, mobile app, audio download, or on the web, the program features more than 150 voices from all walks of life – artists, educators, civic leaders, historians, and those with personal connections to the artworks. Unique audio programs are available for more than 70 outdoor sculptures throughout Center City Philadelphia and Fairmount Park.

Breathing life into the aged and weathered bronze

Before it could return to public view, Maja required special conservation to tackle corrosion and protect the work from further deterioration.

Performed by Adam Jenkins Conservation Services, LLC, a state-of-the-art laser treatment was used to delicately and meticulously remove green streaks of corrosion on the bronze, creating a more even surface coloration. After the laser treatment, a special wax coating was applied, which saturates and darkens the bronze and provides a more unified surface appearance. The wax will also protect the artwork while it’s installed outdoors.

The goal was not to bring the sculpture back to its true original appearance, but to restore the work while still showing the color variation the bronze had acquired over time – signaling that this is not a contemporary sculpture.

The Association for Public Art (aPA) worked with the conservator to develop a treatment approach, which was based on comparison with other casts of Maja in outdoor collections, including UCLA’s Franklin D. Murphy Sculpture Garden.

Gerhard Marcks and the Nazi Concept of 'Degenerate Art'

An Essay by Paul B. Jaskot

. . . modernist artists like Marcks who experimented with form and subject matter were ‘bad’ artists [according to Nazi art policy]. They dragged down German culture with their depictions of sexualized bodies, ambiguous takes on Christian themes, or overt sarcastic responses to the military and to the state.

It is shocking to remember that one of the most popular blockbuster exhibitions of all time has been the racist and reactionary “Degenerate Art” show. The exhibition opened in 1937 in Munich under Nazi Party patronage and featured two works by Gerhard Marcks. By the time the show returned to Goebbels’ Propaganda Ministry in 1941 after touring cities in Germany and Austria, over 3 million people had visited. Needless to say, “degenerate” was a term already familiar to readers of German art criticism before the exhibition, as it had been applied by many Nazi artworld figures to various artworks and artists representing supposedly unhealthy, Communist, and/or Jewish culture. This definition included artists like Marcks, Ernst Ludwig Kirchner, Karl Schmidt-Rottluff, and others interested in Expressionist tendencies to distort depictions of the body for critical effect.

On the surface of things, Nazi art policy as embodied in the “Degenerate Art” exhibition seems to be straightforward. On the one hand, modernist artists like Marcks who experimented with form and subject matter were “bad” artists. They dragged down German culture with their depictions of sexualized bodies, ambiguous takes on Christian themes, or overt sarcastic responses to the military and to the state. On the other, were the “good” artists at the state-sponsored “Great German Art Exhibition” that opened in Munich the day before “Degenerate Art.” Those latter artists – with their heroic landscapes, naturalistic nudes, and portraits of Hitler – featured leading figures like the sculptor Arno Breker, who were collected by Hitler and other Nazi officials.

The Association for Public Art (aPA, formerly the Fairmount Park Art Association) commissions, preserves, interprets, and promotes public art in Philadelphia. The aPA is the nation’s first private nonprofit organization dedicated to creating a “Museum Without Walls” that informs, engages, and inspires diverse audiences. We honor the past while supporting originality and innovation, and we advance opportunities for creative people to contribute to the city’s places and spaces. Established in 1872, the aPA integrates public art and urban design through exemplary programs and advocacy efforts that connect people with public art.