After being tucked away in storage for more than 25 years, Gerhard Marcks’ sculpture Maja (pronounced \MAI-uh\) will be installed on March 5, 2021 in a newly designed park at 22nd Street and the Benjamin Franklin Parkway. The development of the new public space, named Maja Park, has been a private/public  partnership between AIR Communities (which owns the adjacent Park Towne Place Museum District Residences) and Philadelphia Parks & Recreation, with support from the Commonwealth of Pennsylvania. The Association for Public Art (aPA) has been working with the partners to create a welcoming space for the sculpture and the public. 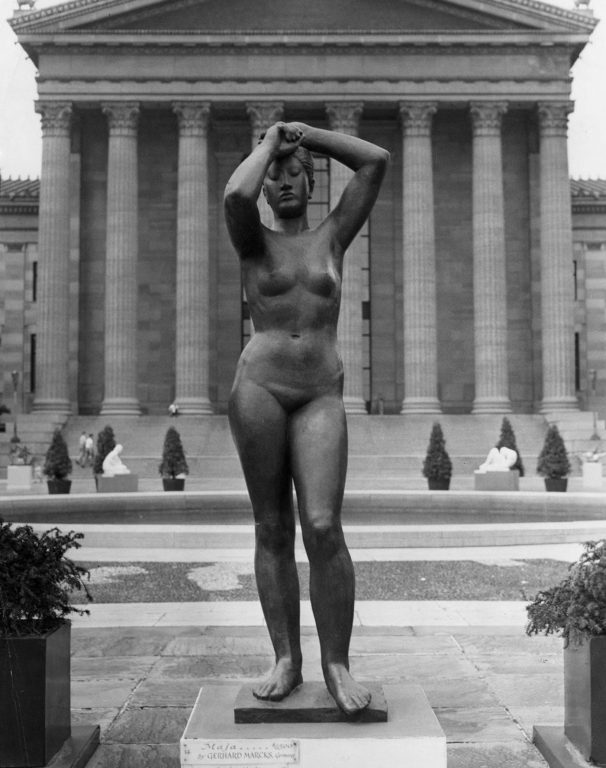 The Fairmount Park Art Association (now the Association for Public Art) originally purchased Maja in 1949 as part of its Third Sculpture International Exhibition located inside and outside of the Philadelphia Museum of Art. This series of exhibitions in 1933, 1940, and 1949 featured works by hundreds of sculptors from around the world, and was organized by the Association to introduce the public to contemporary sculpture and to identify artists for the Ellen Phillips Samuel Memorial on Kelly Drive. Marcks’ Maja, created in 1942, was considered a particularly significant sculpture in the third exhibition – which also included works by Alexander Calder, Jacques Lipchitz, Pablo Picasso, and Barbara Hepworth – and widely seen by sculptors and critics as one of the most important exhibitions in the world at the time. Maja was exhibited prominently at the top of the steps of the Philadelphia Museum of Art.

Gerhard Marcks (1889-1981) was a German sculptor, printmaker, and designer who helped revive the art of sculpture in Germany in the early 20th century. Marcks held teaching positions at the Bauhaus (1919-1925) and the Halle School of Arts and Crafts (1925-1933). In 1933, Nazis dismissed Marcks from his teaching post after he tried to protect a Jewish student from persecution and protested when his Jewish colleagues were fired. The Bauhaus – a school of art and design whose members wanted to shape the future of Germany both politically and artistically – was seen as a threat to the Nazi regime.

Penny Balkin Bach, aPA Executive Director & Chief Curator, reflects on the timeliness of installing a work by an artist with such a persevering story, “despite persecution for speaking out against antisemitism, despite countless setbacks that would understandably lead others to give up, Marcks continued to create work. He continued to remind us of the importance of art and the role of the artist in society.”

This installation of Maja calls attention to the resolve of artists working under duress or persecution. In 1937, the Nazi party held two art exhibitions in Munich – The Great German Art Exhibition, which was meant to show works that Adolf Hitler approved of, and The Degenerate Art Exhibition, which was meant to teach the public about the “art of decay.” Hundreds of works that were seen as too modern, expressionistic, or by Jewish artists were included in the latter exhibition, including Gerhard Marcks’ own sculptures. Although Marcks was creating figurative work, it was considered by the Nazis to be too expressive, disproportionate, and not about a German ideal. Marcks was then barred from exhibiting or selling his sculptures, and a number of his artworks were subsequently confiscated, melted down, and repurposed for war materials.

Marcks later relocated his studio to Berlin, where he continued to create new sculptures. In November 1943 – while he was developing Maja – a bomb destroyed his home and many of his sculptures were left in pieces, but Maja miraculously survived. Walter Gropius, Bauhaus founder, said of his colleague and friend, “…his human qualities, guided him through hell and high water when a bomb destroyed his house, his studio, and his work, and when the Nazis called him degenerate, forbidding him to work. His spirit, though, could not be crushed and guided him to today’s broad recognition.”

Maja was part of a notable exhibition in 1952, Sculpture of the Twentieth Century, organized by the Museum of Modern Art (MoMA) in New York. According to Andrew Carnduff Ritchie, Director of the Museum’s Department of Painting and Sculpture, the exhibit was intended to “give as comprehensive a view as possible of twentieth-century sculpture in all its richness and variety of expression.”

The Philadelphia Museum of Art (PMA) was the first venue for the Sculpture of the Twentieth Century exhibition, which then traveled to the Art Institute of Chicago and culminated at MoMA in 1953. When Maja returned to Philadelphia, the sculpture was installed by the Association on the East Terrace of the PMA until 1992, when it was removed and placed in storage along with other nearby sculptures due to the renovation of the terrace.

Prior to installation at Maja Park, the sculpture underwent extensive conservation. Maja received state-of-the-art laser treatment to delicately and meticulously remove surface corrosion, and a special wax coating was applied to protect the work from further deterioration.

Additional casts of Maja are located at the Franklin D. Murphy Sculpture Garden on the UCLA campus; outside Kunsthalle Emden in Germany; and at the Kunst Museum Winterthur in Switzerland.