In spring 2022, the Association for Public Art (aPA) temporarily removed Mark di Suvero’s Iroquois sculpture from Philadelphia’s Benjamin Franklin Parkway for major conservation restoration. Acquired and installed by aPA in 2007 thanks to the generous support of the late David Pincus, the red-orange I-beam sculpture was in need of a thorough paint job after 15 years of being exposed to the elements, which left the surface faded, chipped, and worn.

The two-day deinstallation required a team of professionals, including conservators, welders, and riggers. The I-beams were carefully disassembled and transported on a flatbed to the Color Works industrial paint facility in Delaware to be stripped, cleaned, repainted, and inspected for hardware issues. Iroquois returned to the Parkway in September 2022 with a fresh, brighter look as part of aPA’s 150th anniversary.

This conservation project is being undertaken and managed by Materials Conservation, assisted by Mammoet riggers, Color Works industrial paint contractors, Atlantic Coating Consultants (Independent Representatives of Tnemec Paint), as well as the artist’s studio, Spacetime CC. Funding has been provided in part by the generous support of the Pincus Family Foundation. 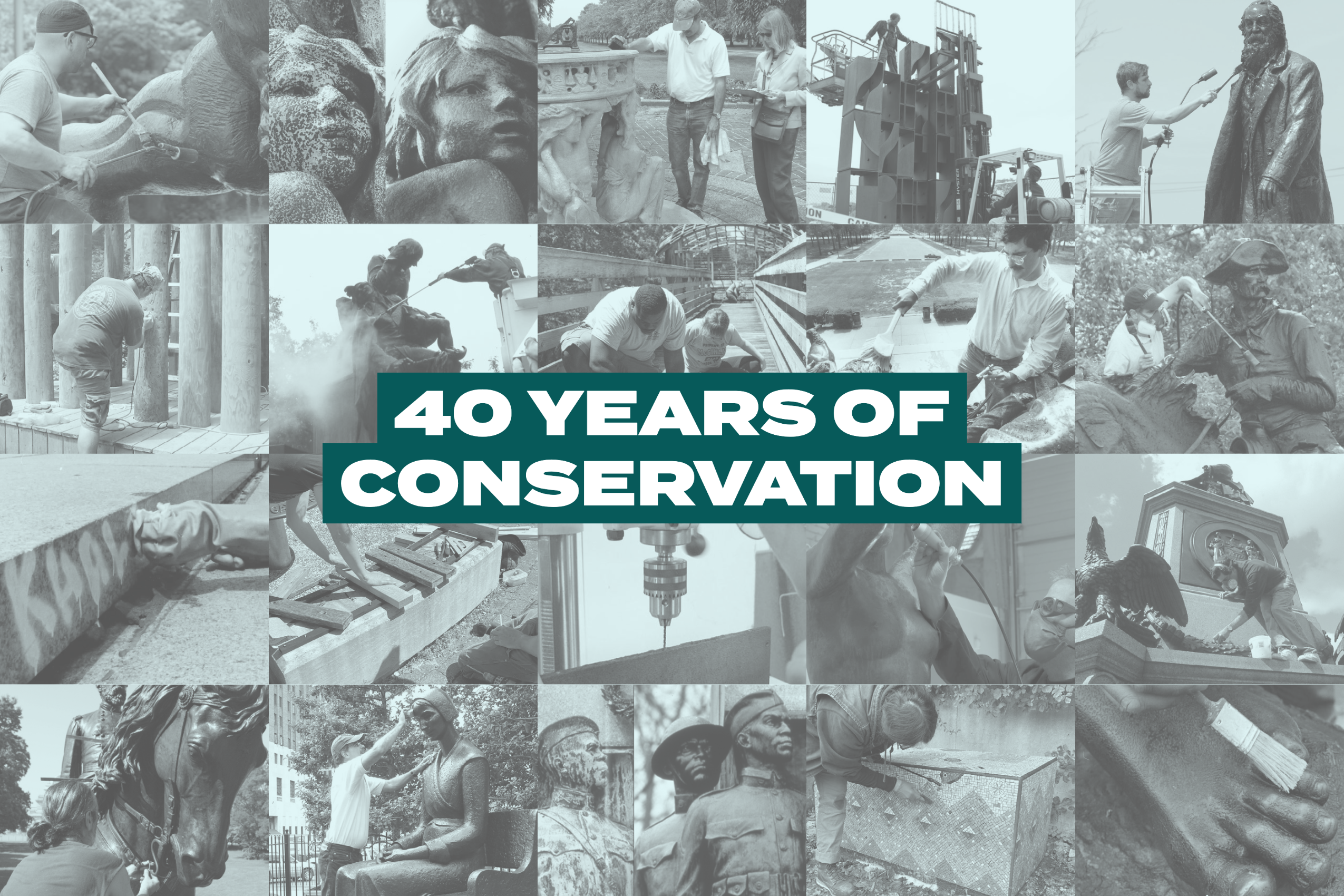 In 1982, the Association for Public Art (then the Fairmount Park Art Association) initiated a landmark sculpture conservation program for Philadelphia, which is now one of the longest continuously operating programs of its kind in the country.

The Association recognized the need to preserve Philadelphia’s existing sculpture history, even as we explored new directions and approaches to public art. As we looked toward the future, we were equally concerned with the treasures of the past.

It began as a two-year pilot program with generous support from the Mabel Pew Myrin Trust, with 16 works of historic and artistic importance selected to receive initial treatment, including Cowboy (1908) by Frederic Remington and Three Way Piece Number 1: Points (1964) by Henry Moore. These initial efforts evolved into a robust annual maintenance program that provides treatment for more than thirty public artworks in Philadelphia each spring.

“The Association recognized the need to preserve Philadelphia’s existing sculpture history, even as we explored new directions and approaches to public art,” said our Executive Director Penny Balkin Bach when the program first began. “As we looked toward the future, we were equally concerned with the treasures of the past . . . . From my point of view, the issues of care, maintenance, artistic intent, and environmental concerns are the business of all public art, no matter when the work is created.”

The Association for Public Art (aPA) is wrapping up two big months of public art conservation projects in Philadelphia, performing much-needed restorations, repairs, and annual maintenance. Each spring, we provide conservation treatment for approximately 30 artworks in the city made of all kinds of materials (bronze, marble, wood, steel, etc.) and take on special projects as needed, like disassembling a massive I-beam sculpture for repainting! (More on that below.)

Now in its 40th year, our conservation program is one of the longest continuously operating programs of its kind in the country.

Take a look at some of the work we did this season.