Based on Hamlet’s words, “…reminding us of the omnipresence and life-sustaining nature of this element,” Walker Kirtland Hancock’s Air was commissioned by the City of Philadelphia’s Percent for Art program and installed in 1982 at what was once the Civic Center in West Philadelphia. (Two other sculptures were also commissioned for the project: Joe Brown’s Earth and Evangelos William Frudakis’ Water.)

When the Civic Center was demolished in 1999, Air was placed into storage for more than a decade. In April 2015, the Office of Arts, Culture and the Creative Economy, in partnership with the Schuylkill River Development Corporation, restored and installed Air on the Schuylkill Banks at the Cherry Street overlook, across from 30th Street Station where Hancock’s heroic Pennsylvania Railroad War Memorial is located.

Born in St. Louis, MO, Walker Hancock (1901-1998) studied under Charles Grafly at the Pennsylvania Academy of the Fine Arts and served as an Instructor of Sculpture from 1920-1967. During World War II, Hancock served in the military and joined the “Monuments Men,” an overseas unit that recovered and protected cultural property during the war. Among the many awards that Hancock received were the National Medal of Arts in 1989 and the Presidential Medal of Freedom in 1990. 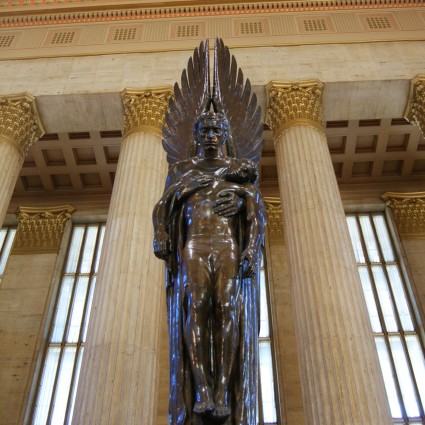